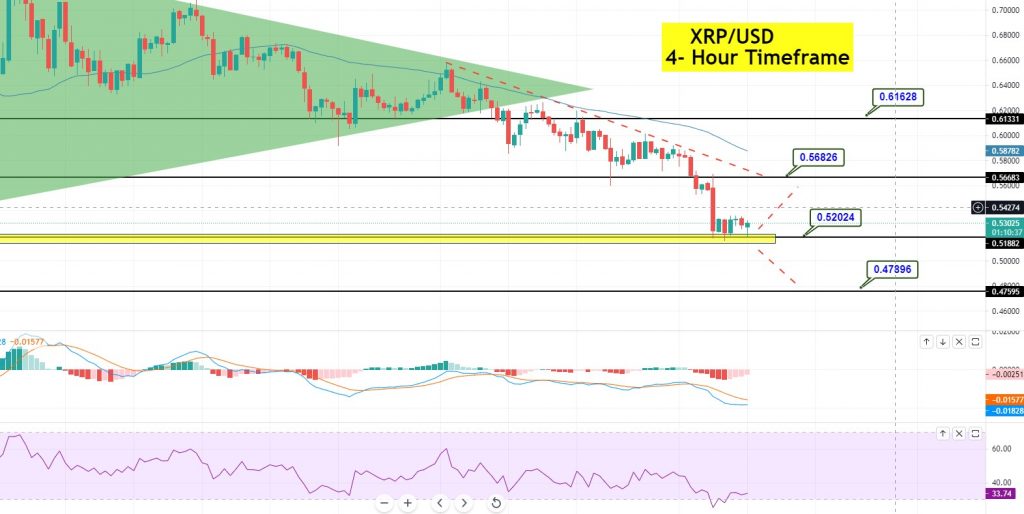 The Ripple price forecast remains bearish, as the coin has plunged from $0.5680 to $0.5200. The XRP/USD crypto coin failed to stop its declining streak of the previous day, remaining depressed, well below the $0.53053 level.

Ripple declined by 5.22% in the past twenty-four hours. After a failed try to settle above $0.56920, XRP extended its declines to below the 0.53037 level. The XRP price even broke the $0.51755 support level, and it dropped well below the 100-hourly simple moving average. However, the downfall in the Ripple was mainly sponsored by the stronger US dollar. Meanwhile, the volatile crypto market has also been playing a major role in undermining the value of the Ripple.

On the USD front, the broad-based US dollar maintained its upward rally of the previous day, still flashing green on the day as the mounting wave of Covid-19 cases all over the world raised doubts about global economic recovery. Thus, the upticks in the US dollar kept the XRP/USD prices under pressure.

Flare Networks has recently announced a new airdrop, as it plans to launch a Canary Network called Songbird. They said that Ripple holders who participated in the Spark airdrop snapshot in December would receive a second airdrop. However, these headlines have failed to leave any notable impact on Ripple’s value as yet.

Conversely, a bullish bounce-off over the 0.5202 level could lead the Ripple price towards 0.5680. On the 4-hour timeframe, the downward trendline will also be extending resistance at the 0.5680 level.

Speaking about the MACD and RSI, both are holding in a sell zone, below 0 and 50, respectively. At the same time, the 50 MA (Moving Average – Green Line) demonstrates a bearish trend in Ripple. On Wednesday, the idea is to place a sell stop below the 0.5200 level, with a target of 0.4785. Good luck!