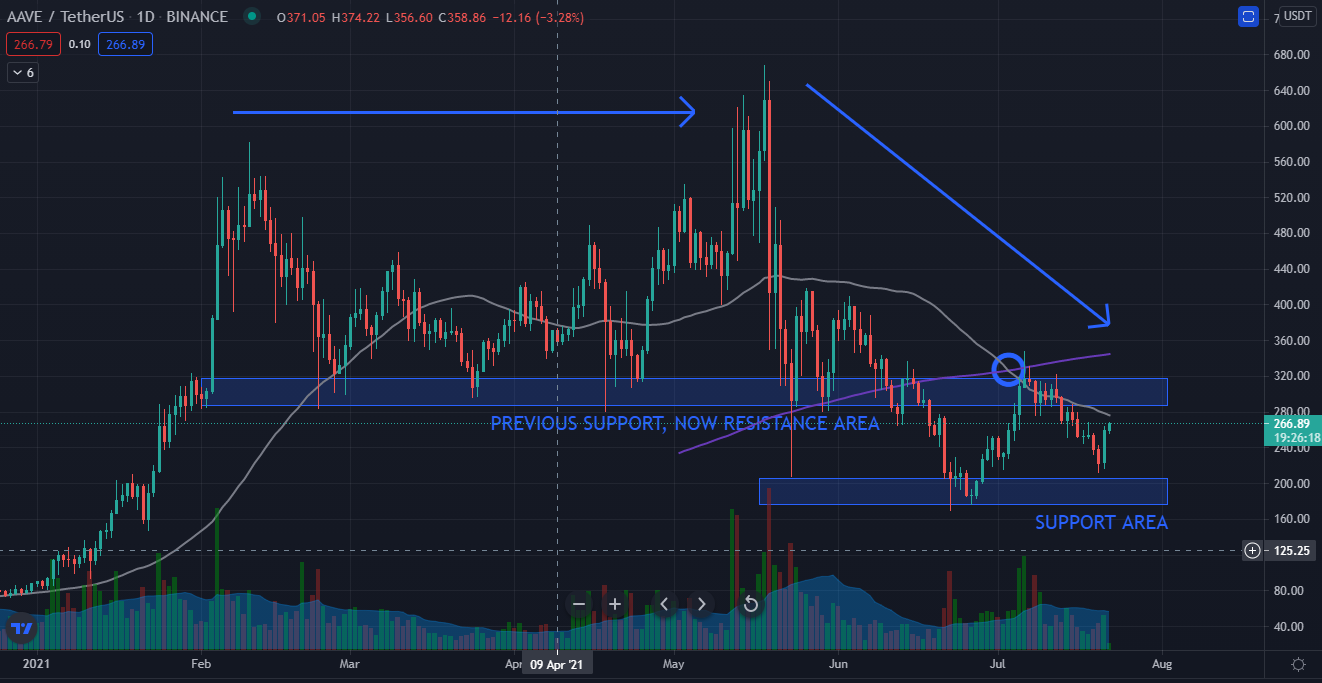 *AAVE: Daily Timeframe, bounced off support and is now trading within a range.

AAVE has been in a midterm downtrend, with a bearish death cross that appeared in early July 2021. It has recently bounced strongly above the 170-200 support zone, along with the entire crypto market, and it is now about to reach a resistance level.F

Previously, this resistance area acted as a support zone for AAVE at least 7 times this year. And when it finally broke below it, AAVE’s price fell to its lowest level for this year at 170, which was almost a -75% drop from the established high of 668 just 2 months previously. AAVE bounced from this sell-down, and the previous support zone has now become a resistance area, as trapped buyers, who bought in this area, have now become sellers, trying to get out at breakeven. AAVE was unable to push above this support-turned-resistance level in the latest rally during the first week of July 2021.

So, there are really a lot of resistances that AAVE needs to break above before it can move higher again.

As such, my bias is that it will just trade within a range and consolidate before moving higher, trading inside the range of the support area and the resistance areas, as seen above.

Given that AAVE is most likely to trade within this range, and as it is currently rallying, it would be better to place short trades at the resistance areas indicated above. Watch how the price moves in these areas and add short positions in tranches. The target price would be the support area and the stop loss would be above 320 volume. This trade idea is invalidated if it breaks above the resistance area, particularly the 200-day moving average. Risk only 0.25% of your total portfolio per tranche.

Short: In tranches, as it hits resistance levels. Risk only 0.25% of your total portfolio per tranche.

AAVE is currently the 27th-largest cryptocurrency in the world, with a market capitalization of $3.39 Billion. Aave is a decentralized cryptocurrency exchange that facilitates the lending and borrowing of crypto. AAVE is the utility token of the exchange. They usually offer discounted fees to users of their native token.