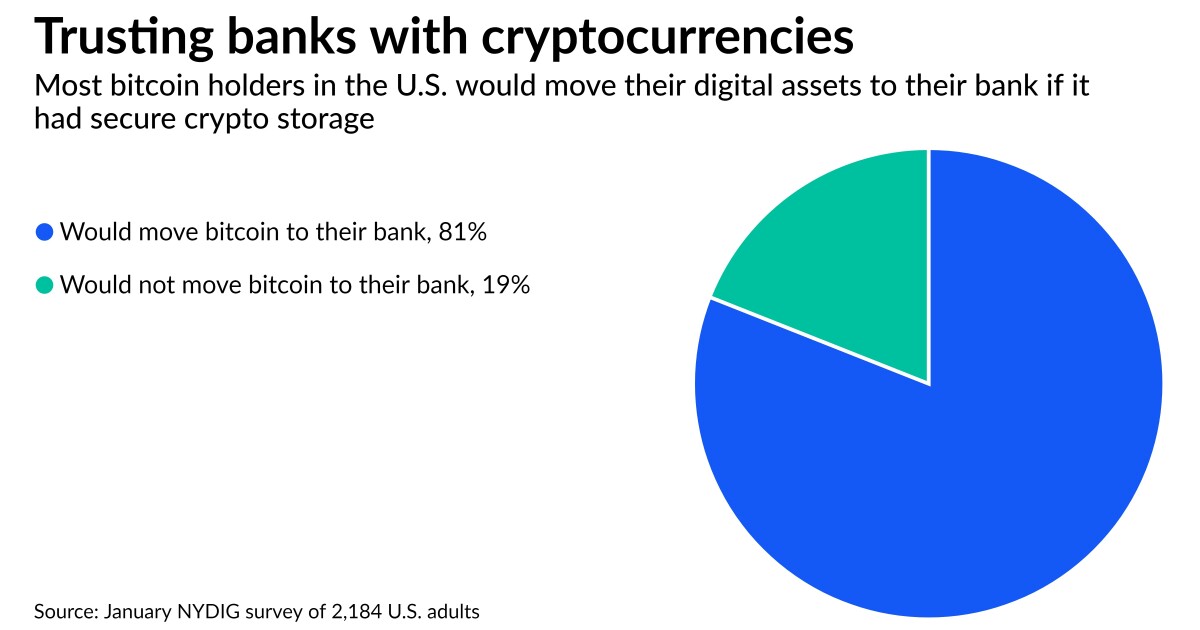 As banks recognize their customers’ growing interest in cryptocurrency, they are asking the vendors that provide their core banking software — Fiserv, FIS, Finastra, Jack Henry, Temenos and Nymbus among them — for help in offering crypto services. The vendors say they are on it.

A survey that the New York cryptocurrency services company NYDIG conducted in January found that 46 million Americans own bitcoin; 81% say they would store it in their bank if they could. Banks have watched this money move out of their customers’ deposit accounts with increasing alarm.

“Some banks see this as a threat,” said Shuki Licht, chief innovation officer at the London-based Finastra. They fear they are losing business “because their customers are moving their money outside of the bank to invest the money in other places.”

“We think that we’ve hit a tipping point with cryptocurrencies,” said Byron Vielehr, chief digital and data officer at Fiserv, which is based in Brookfield, Wisconsin. “You now have tens of millions of Americans holding cryptocurrencies through a variety of different wallets. There’s almost a trillion dollars sitting in bitcoin at this point. Most of the central banks are working on strategies for some type of a central bank digital currency, so, at least from where I sit, it’s not a question of if, it’s a question of how and how fast” banks will provide cryptocurrency services.

The core banking software vendors are all talking to or working with partners to let banks connect to or white-label cryptocurrency wallet software, either to let consumers buy, sell and hold bitcoin, or to let them simply see their cryptocurrency holdings alongside their regular bank accounts. Banks and their vendors are treading carefully, as the regulations governing what banks can do in this space have yet to be written.

“The use case we hear most about it is the ability to allow a consumer to take a hundred dollars out of their savings account, put it into bitcoin, hold it, see it, and then if they want, to trade out of it back to U.S. dollars,” Vielehr said. “It’s a pretty straightforward buy, hold, sell capability.”

Some Finastra customers are going a step further: they’re asking if they can be a part of decentralized finance, Licht said. This is the concept in which parties conduct financial transactions directly with one another, without an intermediary, such as a bank, in the middle. Other customers are looking to use smart contract and blockchain technology to replace manual processes, he said.

Nicole Harper, senior analyst and manager of strategy at Jack Henry in Monett, Missouri, said her company has seen an increase in client inquiries related to cryptocurrency.

“This is not surprising given the current hype, media attention, the changing U.S. policy and regulatory landscape under the Biden Administration, including movement toward a central bank digital currency, Coinbase going public, cryptocurrency service availability in popular apps, and growing consumer and institution acceptance,” she said. “Banks are curious about which digital currencies to pay attention to, the use of cryptocurrencies for payments, and stablecoin.”

At Nymbus, bank customers are asking about commercial and retail use cases, according to Sarah Howell, chief alliance officer at the Miami company. They’re asking for the ability to buy, sell and hold cryptocurrency through a trading platform. Some are also asking to be able to offer crypto rewards for debit card spending or other types of customer behaviors that drive loyalty, Howell said.

FIS, of in Jacksonville, Florida, is also seeing “a lot of interest” in cryptocurrency from its bank clients, according to Rob Lee, head of global core banking and channels. They’re asking “to be more educated around crypto currency and what services are offered to their clients today by other institutions and how that might impact their banking relationship,” he said.

How the core vendors have responded

In May, FIS announced a partnership with NYDIG that will let FIS’s core banking clients offer their customers the ability to buy, sell and hold bitcoin through their bank accounts. Banks that opt for this will set and keep the fees customers are charged and pay a monthly software-as-a-service subscription to NYDIG.

FIS will provide a user interface that connects consumers in-app with bitcoin trading services. NYDIG will handle the custody and trading of bitcoin transactions.

In late 2020, FIS and NYDIG partnered with Quontic Bank to enable the New York-based digital bank to be the first FDIC-insured financial institution in the U.S. to go live with a Bitcoin Rewards debit card.

“FIS is consulting with clients and various partners in the industry to explore additional use cases,” Lee said. “We envision many places that we can support our core customers’ interest in cryptocurrency services in the future.”

Jack Henry customers that use the company’s Banno digital banking platform can use its APIs to integrate with third-party crypto-custody providers. (Banno is a digital banking software startup Jack Henry acquired in 2014.)

“Ultimately, we aim to enable customers to buy, hold, and sell crypto assets within their digital banking experience without assuming balance sheet risk,” Harper said. To that end, the company is working to provide integration with U.S.-regulated crypto currency exchanges for Banno and non-Banno-using customers.

Harper also said that when a U.S. central bank digital currency arrives, Jack Henry will be ready to support it as a new payment rail.

Fiserv is working with First Foundation Bank in Irvine, California, and NYDIG to enable the community bank to offer bitcoin investing to its customers.

“We’re allowing for a transaction to happen where we take dollars off of a bank’s core account processing system and we move it over onto the NYDIG custodial platform,” Vielehr said. “The bitcoin is held there. We then aggregate up the view, so you can see the savings accounts or checking accounts sitting at the financial institutions and we aggregate the NYDIG view into that digital experience.”

Fiserv has a data aggregation platform called AllData that competes with others like Plaid and Finicity. According to Vielehr, it’s connected to 18,000 banks, credit unions, billers, card providers and lenders. Through a recent partnership forged with Verady, a company that provides tax and accounting services in the crypto space, consumers will also be able to see their cryptocurrency assets in another digital wallet at a provider like Coinbase or Kraken.

The Verady integrations will be available in the third quarter, Vielehr said. Fiserv is talking to a long list of other potential partners in the crypto space, he said.

Finastra has been working with fintechs to help them build digital currency wallet apps built on its Fusion Fabric.cloud developer platform and marketplace. Some of these fintechs provide API access to any digital wallet, for instance to get access to Coinbase, and can enable banks to give customers a full view of all their accounts.

“This is very low-risk, the information is read-only,” Licht pointed out. “You’re not giving any permission to invest or buy crypto.”

Others provide crytocurrency custody, and let banks white-label a digital wallet, so their customers can not only view their crypto holdings, but buy and trade crypto or borrow against their digital assets. The third-party custody provider stores the digital currency public and private keys and handles, KYC, risk and compliance.

In both cases, “we’re just in the early stages,” Licht said. “We’re not in production yet, but we are working to expose this type of capability. By doing that, we can take it to the digital banking experience or more sophisticated scenarios around lending, investing and payments.”

Temenos announced in May that it was working with a Swiss fintech, Taurus. The two companies have integrated Taurus’s digital asset and blockchain infrastructure with Temenos’s Transact core banking software. In the future, Temenos, of Geneva, plans to support other forms of digital assets, like tokenized securities, or securities issued as smart contracts over a blockchain.

“What is interesting with tokenized securities is they would enable issuers to access capital markets for a fraction of the cost and time of a traditional IPO, either for regular company stocks, or for instruments usually reserved to wealthy or institutional investors like private equity funds,” said Alexandre Duret, product director at Temenos. “Another benefit is the potential simplification of the settlement process and of the whole market infrastructure that supports it.”

A wild card for all these efforts is what regulators will do. Banks have gotten a mixed message about whether they can help customers buy and sell bitcoin and other digital currencies. This has dampened the enthusiasm of some bank clients, but not all, vendors say.

Last July, then-acting Comptroller of the Currency Brian Brooks posted a letter that gave national banks permission to issue and provide custody of digital currencies. Brooks’s successor, Michael Hsu, has said the agency is reviewing this and other policies. The FDIC recently put out a request for information on digital assets.

“Banks are very, very confused about regulation,” Licht said. “We are trying now to understand where the regulators are going. We are trying to come up with use cases that don’t put the banks or the consumers at any kind of risk. The technology is here, but from a regulatory perspective, it’s a challenge for the banks.”

At Jack Henry, Harper said she sees banks proceeding cautiously due to the OCC’s tentative stance.

“Some will seek to become early adopters in an effort to differentiate and gain early-mover advantage,” she said. “Others will opt to watch from the sidelines to see how it plays out before choosing when or if to take the field. We don’t see regulators like the OCC slowing down the research and discovery phase of cryptocurrency, which is where most of Jack Henry’s market currently is.”

Howell at Nymbus also has not seen regulatory uncertainty cause bank customers to put the brakes on their crypto plans.

“Michael Hsu’s review of the OCC’s crypto-related guidance under the administration of former acting Comptroller Brian Brooks is a reasonable request for any new leader stepping into a critical role in a matrixed regulatory environment,” she said. “It indicates the OCC’s intent to consider their actions within the context of other regulatory stakeholders in the U.S. banking system, to include the FDIC, Federal Reserve and the states.”